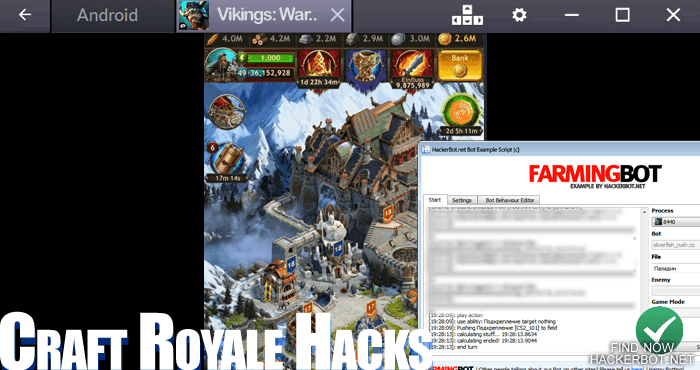 A Vikings War of Clans Hack is any software, app, tool, modification, method or other means of gaining unfair advantages in the game, cheat and get more free gold (gems), silver (money), resources, summons, items and other goodies. – While there are many different ways of cheating in War of Clans, hacks and generators for unlimited free resources, gold, silver and items do not exist and are always fake.

Modding is an extremely complex process whereby cheats are implemented directly into the game app, making it the most user-friendly way of cheating in War of Clans by far, but having the downside of being extremely demanding on the developer of the modded app: Not only does the game app need to be decompiled, but it also needs to be reverse-engineered, modified to include working cheats, then recompiled and delivered in a for that allows the end-user to relatively easily download and install the mod on their mobile device without any bugs. – So while the installation process for War of Clans mods is not quire trivial, demanding users to follow simple instructions, it beats the alternatives by far and is able to allow even inexperienced cheaters to get access to quality game hacking features.

Mod Menus are simply premium mods that will usually come with more features, better quality, more powerful cheats, quicker updates and an in-game menu that allows users to toggle individual option on and off and customize cheats to their preferences. 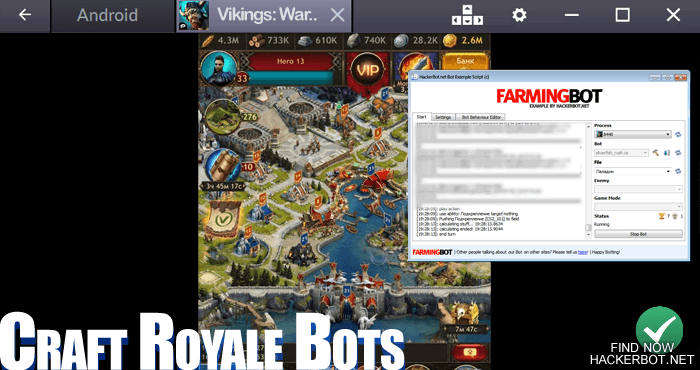 There are 2 different ways to hack the game, either through memory editing requiring a rooted phone and memory editing tools or using premade hacked game files, such as Vikings hacked APKs for Android or modded IPAs for iOS. Cheating in the browser game is possible too using modded flash game clients, but is less popular. However, downloading hacked apps can be dangerous,  since most offers are either scams or malware. So be very careful when looking to download Vikings WoC Hacks. Options commonly include auto building, auto troop training, auto loyalty points farming and most importantly invader farming. These cheats are pretty powerful and can do a lot of the work for you without you having to manually go in and grind.

Keep in mind that unlimited gold, resources, castle levels, packs, gear and boosts cannot be hacked using any kind of tool or generator, since this is an online multiplayer game and all the integral data concerning your player account is stored on the game servers hosted by the developers that cannot possible be accessed and written. The only way to get unlimited gold is through exploits or a game admin. 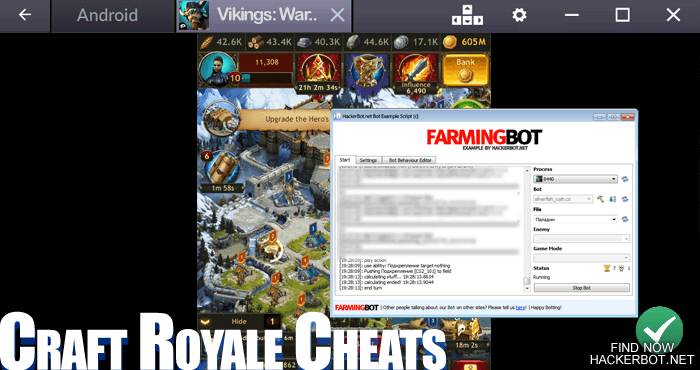 As in other mobile games and browser games, it is possible to set up programs, either custom software or simple macro recorders to log into the game automatically and perform actions for you. Actions in War of Clans that can be easily automated include: Farming intruders, putting up shields, sending resources, helping guild mates, collecting rewards, upgrading buildings, banking resources, raiding players, scouting, upgrade gear and armor to legendary, choosing knowledge research and a lot more.

Bots are commonly run either directly on your mobile device as an app that connects to the server, a program on PC that bots directly or uses an emulator to play the game manually or they can even be set up using macro recorders to record user input on PC and replay it to automate actions. – Bots are the most powerful and versatile cheat to use in Vikings: War of Clans and are the closest you will get to an unlimited resources and gold cheat. Also the script route of cheating allows you to save time that you can spend in real life, leaving you to come back and enjoy the spoils instead of grinding 24/7/365.

The best players in War of Clans are using a lot of alternate accounts to feed resources to their mains, to use them as banks and so on. Essentially what you need to use multiple accounts at one time without getting banned for it and so send resoruces to yourself, have your mule guild and so on, is at least one PC, at least one VPN to change your IP Address for every instance of the game and a lot of time.

Players will have multiple devices and emulators logging into multiple accounts, have them all in the same guild, combine troops for attacking and farming, using certain accounts as banks that are constantly shielded and cannot be attacked to store and save resources, use some accounts as resource slaves and so on. – Essentially this is an incredibly powerful way of cheating, but will require you to have multiple devices, preferably PC + emulator and a VPN to mask your IP to avoid bans. If you want to be the top player on your server, you will need this, every top player does it.