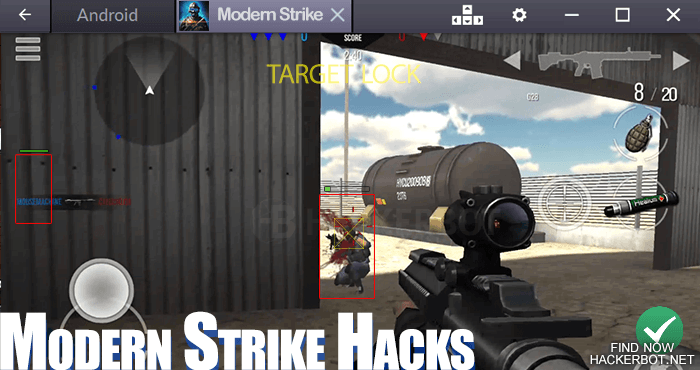 A Modern Strike Hack is any modification, tool, software, app, method or other means for players to gain advantages in the game, get more kills, survive longer, get more free Gold (gems), Credits (money / cash), weapon unlocks, skins and other goodies. – While many cheating methods exist, such as aimbots and wallhacks for easier kills, hacks and generators for unlimited free gold, credits and unlocks do not exist and are always fake.

Modding is the most common method of cheating applied in mobile games for both Android and iOS. Mods are modified game files that have been manipulated, rather decompiled, reverse-engineered, modified and recompiled, to include cheats right out of the box. They are by far the most user-friendly cheat out there for the Modern Strike FPS game and while the installation process still requires a user to be able to follow some simple instructions, it is far easier than trying to use tools or modding software to hack the game yourself.

Mod Menus are advanced versions of normal modded game clients that will usually come with more and more advanced features, better options, being updated more quickly and offering an in-game menu to toggle individual hack features and customize options. While most mod menus for Modern Strike are premium downloads, free versions with limited features are often available as free downloads. 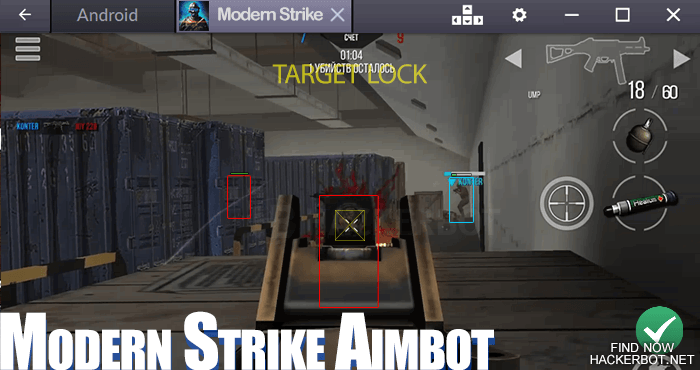 Modern Strike shooter game does already have an integrated aim assist that works pretty well, however by hacking the game client it is possible to increase aim assist to make aiming and shooting a lot faster and even near instant. It is also possible to increase the range of the aim assist to get an actual aimbot. The aimbot will either work by you holding down on a specific area of the screen and this triggering the auto aiming function or it will replace the default aim assistant included in Modern Strike Online.

Since there are no killcams it is very hard for other players to notice an aimbot, except of course for the huge k/d ration in the match leaderboards. A Modern Strike Aimbot is the perfect solution for not only speeding up gold and credits farming ut also to unlock more weapons, skins and leveling up your account in general. However, using this kind of hacked client will take all the skill out of playing the game and make the game on average less fun for you. So keep that in mind. 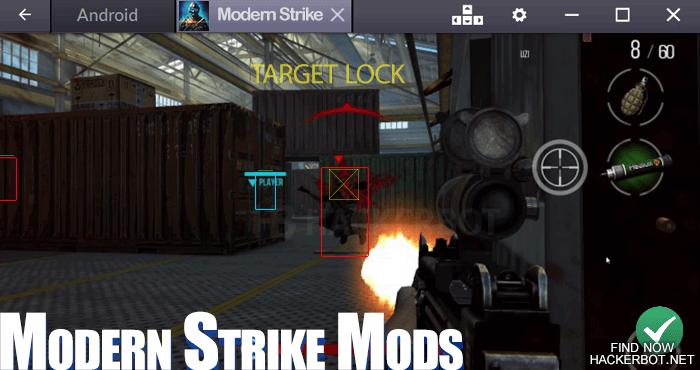 Everyone that has ever played a multiplayer shooter online knows the infamous wallhack: A kind of cheating app that allows you to see other players through walls, making it easy to track them, avoid them, hunt and kill them for some easy XP and credits. Hile setting this kind of cheat up for Android and iOS is a lot harder than on a conventional shooter, it is still possible to achieve through game modding and hacked game files. – Generally using an ESP as opposed to auto aiming is a lot more fun to do, as it will still retain the skill that is needed in the game and with it the sense of achievement when you get some kills.

Modern Strike Walhacks can also show you some advanced information such as grenade warnings, enemy health, enemy weapons, weapons on the floor, if people are aiming at you and a lot more. 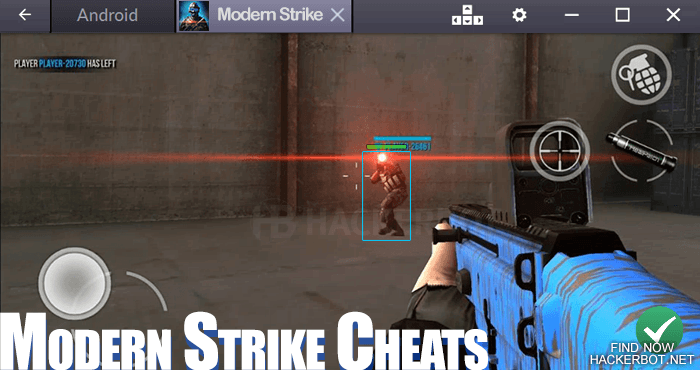 As already pointed out, Modern Strike Online is, as the name clearly implies, is an online game. This means that a lot of data, in fact most of it, is processed and stored on the game servers that cannot be hacked at all. This means that cheats such as unlimited gold, infinite credits, invisibility, teleporting, weapon unlockers, unlimited first aid kits, armor, premium weapon unlocks, and damage hacks are not possible in Modern Strike at all.

Anyone that claims that they can get you some kind of generator or tool to get credits or gold ect for the game is promising you the impossible and is probably looking to trick you into doing survey offers. So please, please stay away from such shady dealings. – The truth about the matter is that not every values in a multiplayer game can be changed, unless you own the host (server) that the game is run on and currently there are no private servers for this particular shooter.

Please be very careful when downloading random peoples apps that claim to be hacked game files for Modern Strike Mobile. A lot of them can infect your phone, especially if it is rooted and jailborken. If you do not know a website and have no prior experience with them or know someone who hack downloaded working modded APKs/IPAs from there, do not trust them. – You can find trusted sites to download modded mobile game clients from on our site. If you are going to experiment with random apps you download off of the web, please use an emulator instead of your actual phone and do not connect it to your main google or apple account.

Since mouse and keyboard controls are a lot more accurate an faster than mobile phone or pad touchscreen controls, simply using an emulator to play the game on your PC or Mac will make the game a lot easier and make killing enemies a breeze: Not technically a cheat, but just as effective and unfair.