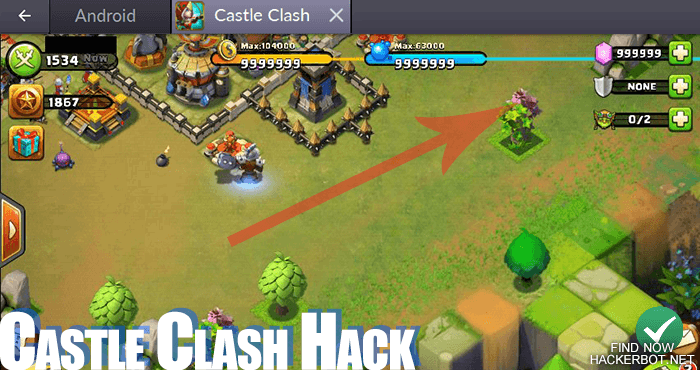 Is cheating in Castle Clash possible?
Yes indeed there are cheats for Castle Clash: Mods or Hacked Clients for Castle Clash are game files that can simply, and often for free, be downloaded and will replace the original game on your Android or iOS device. Once installed, the mod comes with hacks for Castle Clash already enabled. All you do is play the game.  There are automated building programs (bots) that will build you base automatically, recruit troops and heroes. There are also raid bots that will find suited target castles and automatically build raid them for more resources like gold and mana. Aside from Castle Clash Bots, there are also some minor hacks and exploits, but no Gold or Mana Hacks, Merits, Crystal or Shard Adders of any kind. These values are processed on the IGG.com servers and therefore are not hackable.

Hacks are what is more commonly known as a Mod, a modified game file of Castle Clash that has been reverse-engineered and modified in such a way as to include a hardcoded trainer with cheating options, allowing you to use hacks freely as you play. Such hacks can usually be downloaded for free, but will usually stop working after Castle Clash receives an update / patch. So with every update of the game, you will need to find a new modded game file for your Android or iOS device. While these cheats can be very powerful and help you to farm a lot faster, unlock more heroes, pets, get more free gems, merits, fame, gold, mana ect, they cannot edit your gems directly. Unlimited free gems hacks for Castle Clash are sadly not a feature of mods and never will be. For Android these Castle Clash hacks usually come as modified APK files and on iOS, they are IPA file downloads. 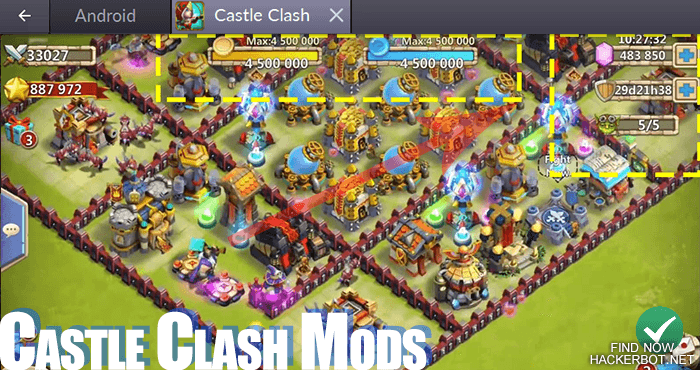 Bots are software that is able to automatically play Castle Clash for you and automatically farm gems, merits, fame and other resources for you. Bots can build your base do raiding / expiditions, dungeons, guild wars offense, team monsters, lost realm to farm legendary heroes, pets and XP, shards ect. A bot can either be run from your Android or iOS device or you can create your own bot using macro recording software and bot the game through an emulator.

Bot apps are the closest thing you will get to an unlimited gems hack for Castle Clash, since they will essentially be able to farm everything in the game for you over time. Also bots are very unlikely to get banned, unless you are being toxic, obvious and not supporting Got Games. 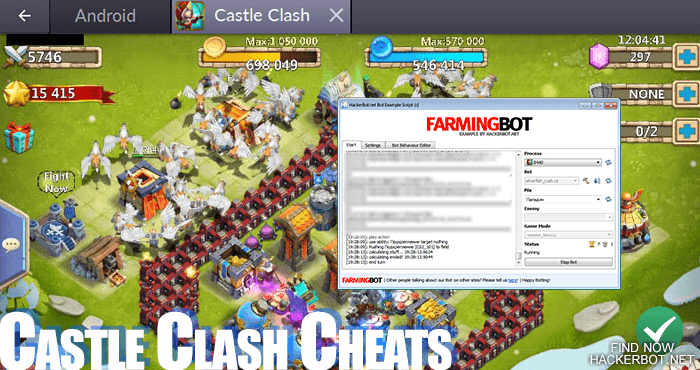 Since this is an online mobile strategy game and there is no way to hack values such as your money, resources, heroes, troops, skill points and so on directly, the use of robots is really the most effective way of cheating in Castle Clash. Bots are able to build your base automatically, spend all your resources on troops, raid other players automatically, farm Honor Badges, shards, open daily rewards, gambling and lots more. A bot can essentially perform any kind of task that does not require human creative thinking and can therefore be scripted or performed by a very simple Castle Clash Bot AI. A decent bot will be able to farm and build your Town Hall to level 25 within about 2 months without you having to play manually at all if that is what you were to choose to do. Essentially a bot takes part of all the repetitive stuff, leaving you to have fun. A bot can also save you money, but we would still urge you to spend money if you love the game and want to support the developers and want the game to improve. 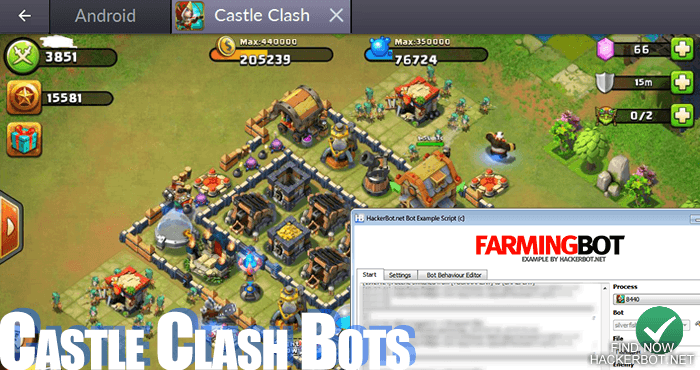 How likely is it to get banned for cheating in Castle Clash?
Generally in mobile online games it is more likely to get detected using hacks than bots, since bots do not necessarily need rooted mobile devices and do not inject any code into your Castle Clash app. When using bots there is not as much risk, since mobile games are quite simple and telling bots from real human players is not yet possible except by analyzing time played per day. So it is recommended that if you are using Castle Clash bots, you do not leave them running more than 14h per day, since no human player can actually play a game that long, since they need sleep. The most risky kind of cheat for Castle Clash is the exploit: these very rare bugs in the game that can allow you to get basically unlimited gems, gold and mana are usually patched as soon as they get to the public and most users at that time will get banned from the game. – So do make sure that you are using private exploits and bots if you are looking to cheat in this game.

Are there any Resource Hacks, Gem Adders and Unlimited Troop Cheats?
No sadly these hacks are impossible in Castle Clash: Game variables like your troops, mana, gold, honor badges, gems, shards, merits, crystals, hero might and so on are stored on the IGG game servers and therefore cannot be hacked using any legal means and without going to prison. Anyone out there on the internet that tells you that they can get you gold or gems ect is a scammer and is tryint to scam you into filling in surveys and download viruses or fakes. Think about it: If there was a free and easy way to get unlimited gems in Castle Clash, everyone would use it, IGG.com would stop making money and the game would die within a few weeks. So the fact that CC is still up and working is proof that these hacks do simply not work.

On what platform you play the game does not matter here: iOS, Android or Facebook the cheating options available do not really change deepening on the device you are using all that changes is the actual software and code used.