Is it possible to cheat in Faeria?
Yes. There are multiple ways to cheat and automate play in oder to get more gold, gems and cards for free: Bots can be used to automatically log into the game and farm PvE and PvP matches for you to slowly but surely amass enough gold to slowly but surely unlock all the cards and gold cards by buying lots of battle chests and mythic chests. There are also hacked game files for mobile (iOS and Android) that allow for speedhacks and auto play as well as deactivating animations. Hacks are also possible and PC / Mac but need to be injected or activated through a value editor. - On all platforms it is impossible to get God Modes or Unlimited Gems / Gold or free battle chests and mythic chests, since this is an online CCG and all account data is stored on the game servers owned by Abrakam. For Educational Use Only

Faeria Bots
A bot is a program that is able to access the Faeria either directly by contacting the game server or by manually inputting commands into the game client. A good Faeria bot will be able to farm daily quests, login rewards, auto farm PvP and PvE battles, change decks, adjust strategies to the kinds of cards you are running in your deck; be that rush or control, land spam ect. However, a bot will not be able to get you to the top of the tanked ladders usually, as an AI (artificial intelligence) will never really be able to consistently beat a real human player with experience, game knowledge and creative human thinking. So keep that in mind. Farming casual games or pandora mode will many times be more sucessful than farming ranked using an AI. Also easy to play efficient decks using OP cards are better than decks that have very complicated win conditions, unless you create your cwn customized AI, wich some Faeria bot developers should allow you to do. 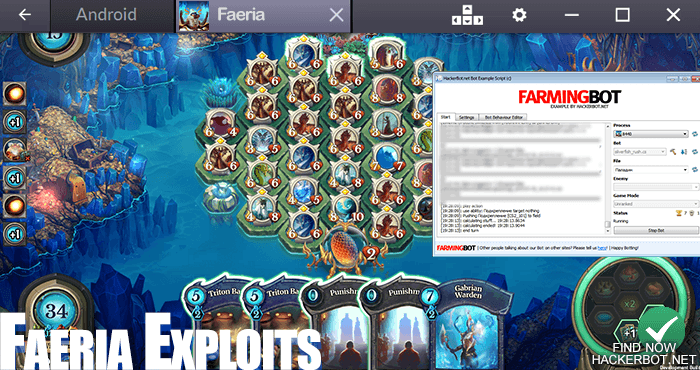 Faeria Hacks
Direct cheating tools (aka. Hacks or Trainers) come in different varieties depending on your platform. The most commonly used platform for hacks would be mobile devices as they allow you to decompile and mod game files (APKs and IPAs) very easily. Hacked game glients basically allow the game hacker to implement the cheatig functions directly into the Faeria game files. Its the dark side of modding, mod to cheat. However, this generally only works on mobile as the PC/Mac files are too sophisticate to simply decompile and mod and such modifications are much easier found and banned on PC.

Hacks and trainers on all platforms will generally allow you to speed up the game, disable animations, use custom graphics ect. Very overpowered cheats such as God Modes, infinite mana, insta mana wells, or unlocking all cards are not possible, since these things are tracked on the game server that is unhackable for all practical puposes. However, there may be an exploit here and there that will allow you to get more cards of certain rarities into your deck or get more than 30 cards as we  have seen in other siilar online card games. Deck trackers / draft tools
There are a variety of tools that we have seen in other card games, that are incredibly useful to a good player that knows how to use them correctly to increase his win rate and climb ranked. Deck trackers can keep track of which cards you have played or drawn, displaying not only the cards left in your deck, but your chance of drawing them this turn or the next ect. Drafting tools usually work off of a tier list of cards and will suggest to you the best cards to pick in a draft situation, such as in pandora mode. While these tools do not necessarily qualify as cheating, they can be used to gain an edge that other players do not necessarily have and gain the advantage in competitive PvP. Tools can also be used to analyze momentary board states and hands to suggest moves with the highest statistical chance of resulting in a win, which is essentially a bot that is used to actively play the game and do math for you instead fo farming the game for gold outright. (AI Assistant Tools) 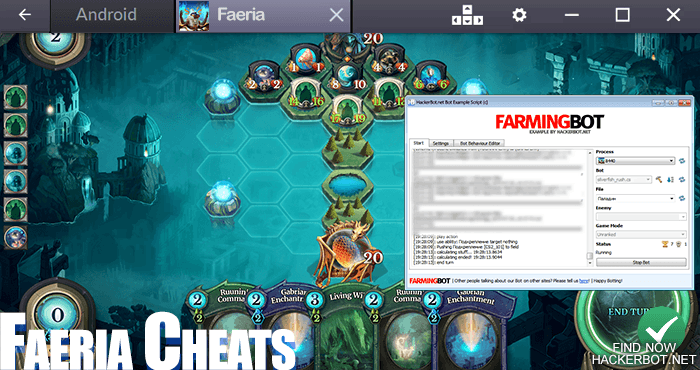 Is it legal to cheat in Faeria?
Yes. Cheating in online and offline games on every platform is completely legal everywhere in the world. Generally, people wont congratualte you on the Faeria hacks you downloaded, but thats pretty much it. Cheating is against the ToS, which basically means you account can be deleted. However, the developers do the right to ban any user of their game at any time and for any reason anyways. - so keep that in mind and only download cheating software that is up to date and undetected at the time of you downloading it.

Are Faeria Gem / Gold Generators for real / legit?
No they are not. As previously pointed out, it is clearly impossible to change your Faeria gems or gold, unless you have direct access to the game servers, which means you would have to be a game admin or developer over at Abrakam. Hacking the servers is impossible and has not been done and will not be done either. So don’t trust the people offering you impossible Faeria cheats in return for filling in surveys or completing offers or downloading adware or whatever. - They are all scams, because the thing they “offer” is not possible.