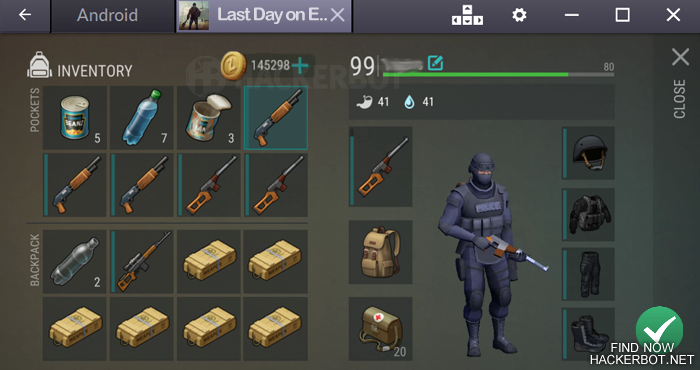 A Last Day on Earth Survival Hack is any tool, software, app, modification, script, procedure or other means to gain unfair advantages, cheat, get more free coins, money, gems, resources, items, weapons, XP and other goodies in Last Day on Earth on Android and iOS with no root or jailbrake required. – While there are different ways of achieving these cheats, hacks and generators for unlimited free gems, money, coins, and resources do not exist and are always fake.

Modding is by far the most popular cheating method among Last Day on Earth Survival players, as it is, while not entirely trivial, much easier to implement than alternative game hacking methods: Mods are modified game clients, such as APK files for Android and iOS game apps, that have been decompiled, reverse-engineered and then modified to include game hack options right out of the box, that can easily be downloaded and installed by following some simple steps. While most mods do not require any root and no jailbrake, they often require you to modify or replace system files, which can generally only be done using admin access.

Mod Menus are premium mods that will usually include more options, be made by the best developers in the game cheating industry, have more powerful cheating features, quicker updates and an in-game menu to customize individual cheats and toggle them on and off at will. – Free versions of mod menus are often available for free download, but will include a limited number of features.

Hacking this game is possible in a variety of ways: Using memory editors and data editors it is possible to manually edit game memory to enable simple cheats like speedhacks, minor teleports, in the past it was possible to spawn unreleased items and hack coins, but that has been patched now, there are also possibilities for zoomhacks that allow you to see more of the map on your screen and minimap than would usually be possible ect. However, hacking the game manually may be a lot harder than using prehacked games to do the same job.

Modded/Hacked game files (apks) are another way, and the more popular way at that, to hack Last Day on Earth: Survival. Modded games are easy to install, come with cheating options hardcoded into the game and usually work for a few weeks until the game gets an update and the file has to be updated. These modded game files are made by decompiling the original game, reprogramming it to include code that allows for cheating options, such as increased walking speed, auto aim, zoomhacks, partial god modes, walking through walls (noclip), spawning items and so on. The only downside to this kind of cheat is that legitimate files are really hard to find and the chances of infection are high if you don’t know what you are doing. A rooted device is NOT necessary. 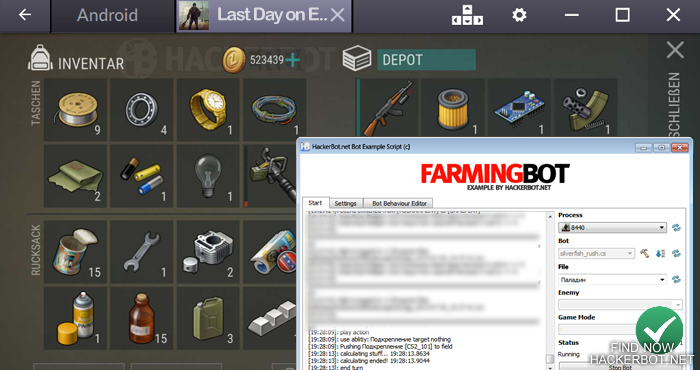 As in most online mobile games, bots can be used to automate tasks, farm gear, resources and weapons automatically, sell items, raid other players ect in LDoE as well. A bot is in essence an app or program running on your device/emulator/PC that will log into your game and perform actions automatically. The way they are used in Last Day on Earth: Survival is to do low-risk tasks such as walking to an area naked or equipped with low-value gear and then loot the area automatically and bring back the loot to your base, deposit it and repeat the process in order to slowly farm supply drops, crafting resources, building resources and gear/weapons without spending energy. Bots can also be used to automatically manage your base, harvest crops, manage thirst hunger and health ect.

Using a bot is the closest you will come to an actual money hack or item hack in Last Day on Earth after the beta, since a bot allows you to farm resouces automatically without taking risks, level up consistently but slowly, build you base ect. Advanced bots will also be able to avoid telegraphed AoE attacks from spewers and other enemies automatically and kite them, but so far no bot is able to efficiently farm NPC mobs for XP or resouces without dying quickly. Bots are also unable to complete and farm bunkers/dungeons, since that requires actual strategy and human intelligence. As always it is recommended that you do not leave your bot running for too long, or your account may get flagged.

Generators for Last Day on Earth

LDoE is an action ARPG for mobile and it is mostly an online game, which means that most of your “save game” is stored online and not on your device, it also means that your items, health, money/coins, premium packs, item inventory, level ect are stored online as well. The servers where your data is stored cannot be hacked using any tools, generators or whatever people on the internet may claim will hack your game. There are no online cheating tools for any of these resources.

That is the thing about online games: You get a consistent game over years, but you are unable to mod or cheat in core aspects of your game in return. Anyone that clams otherwise is probably trying to trick you into completing surveys, downloading shady software or something of that variety and is not to be trusted.

If you have played LDoE for any length of time, you know that being able to kite enemies, keeping them at range and getting hits in without being hit in return in incredibly important not only against zombies, but also against other players in PvP. Which is why scripts can help you to automatically at the push of a button kite enemies, avoid damage and get your hits in with guns such as the shotgun, M16, AK, ect or even melee weapons. These scripts are only available for emulators and emulators also allow you to map your controls to keyboards, controllers and other devices that will make controlling your character a lot easier and therefore increase your performance in slaughtering both the undead and the living alike. – Changing your controller is not necessarily getting around any rules, but it is getting an edge indeed.

Is it possible to cheat in Last Day on Earth (Android / iOS)?
There are many ways to cheat in LDoE using tools like memory editors, modded APK files, debugging features to spawn items, auto aim bots, scripts and a lot more. Cheating is possible both in Android devices and iOS alike and there is a huge variety of free Cheating apps available for download if you know where to look for. However, there are NO unlimited health hacks (God Modes), unlimited coins (money) / unlimited energy  cheats or anything of that variety, since this is an online action game, and the important game values for your character are stored on the game severs belonging to Kefir!, the developers of the game, that cannot be modded or hacked in any way.