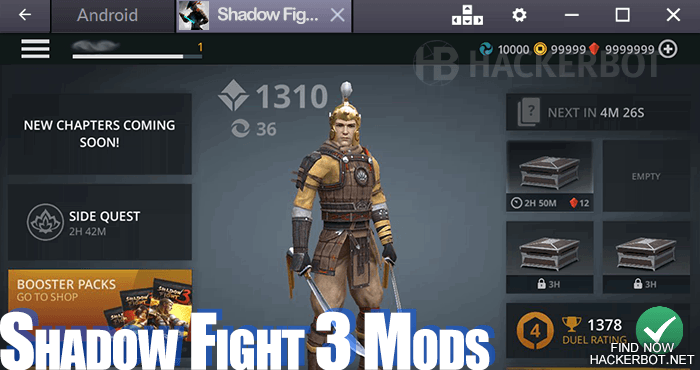 Is it possible to cheat in Shadow Fight 3?
Cheats are possible, absolutely: Hacks and Modded APKs can be used to speedhack the game, automatically fight for you, counter attack and farm the game a lot faster. Hacks are also extremely OP in PvP battles. Bots and script apps can be used to automatically open free chests and card packs every few hours to get a lot of free gear, coins (money) and other goodies. However, god modes, unlimited coin hacks, legendary and epic gear and weapons, Gem generators ect are sadly not something that can be done, since this is an online game app and your “savegame” is stored on the NEKKI online game servers.

Hacks and game mods are the primary way that people use to cheat in Shadow Fight 3. These apps allow someone to modify the way the game operates on your Android / iOS device and manipulate the game servers into processing false information. Speedhacks can speed up your character, automated attack mods can fight for you, dodge attacks and quickly attack the opponent to do maximum damage. Hacks can also allow you to automatically farm missions easier and therefore get you more coins to buy Shadow Fight 3 pack and chests so you can level up your Shadow Energy more quickly. However, no Shadow Fight Mod or Hack can ever increase your stats directly, give you damage, gems, money or legendary / epic items. – Only client-sided data can be changed using apps such as mods, memory editors or patchers. 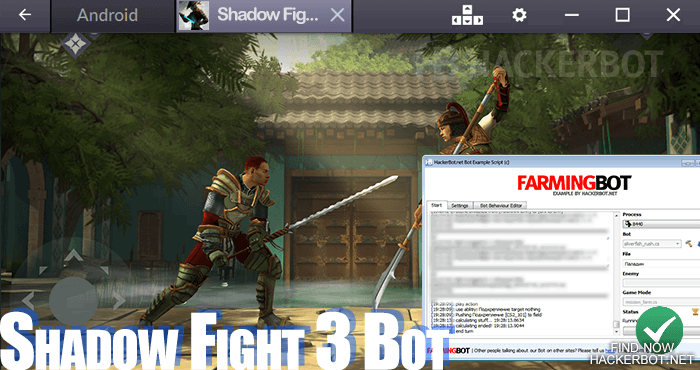 Modified game files or “mods” in short are the main way to implement hacks into a game. It is also possible to do so manually, using software, such as GameGuardian, SB Game Hacker, Cheat Engine, Lucky Patcher ect, but doing so yourself is a lot harder and takes a lot of thime, which is why people prefer using modded game files, such as APKs for Android and IPAs for iOS.

These Mods are made by decompiling the app file of the original game (APK / iOS), then manually codin cheats into the game app itself and recompiling the app into a game file that includes mods, but can still be installed just like the normal game app. Shadow Fight 3 apk mods and iOS mods are just about the easiest and most powerful way to get around the rules in this mobile role-playing action game.Find SF3 Modded APKs here. 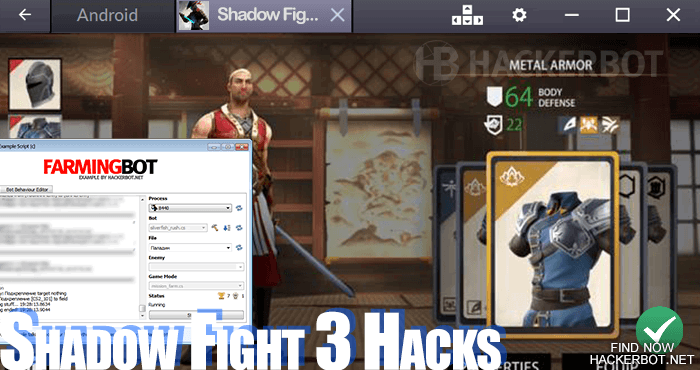 Another popular way that people cheat in SF3 is the use of automated playing apps, called Bots: A bot can play the game automatically for you and without you having to have your phone out or pay any attention to the game, they will farm money / coins for you 24h per day, so you can simply check in at the end of the day and spend all your coins on cards and get all the level ups, free gems ect without having to farm the game yourself.

If you don’t want to download any free ones, or can find any Shadow Fight 3 hacks or bots, then you can also create your own macro script to farm the game for you. All you need is a PC, an emulator, a macro recorder with editor (free ones can be downloaded) and some time and you will be able to farm you own bot and create a loop that can get you automated coins easily.

As always, if you want to find and download free Shadow Fight 3 cheats, hacking apps and other software, visit our Find section and get cheating!