Is it possible to use Cheats in Game of Thrones: Conquest?
Yes, there are indeed cheats for Game of Thrones Conquest out there: Mod menus and hacks can be used to gain various advantages, bots can be used to automatically play the game, farm monsters for gold, research materials, XP and Prestige. However, there are no unlimited Gold Hacks for Game of Thrones Conquest of cheats for research, troops, items, armor ect. This is an online game and all your account and money data is stored on the Warner Bros game servers that cannot be hacked or modded in any way.

Mods are downloadable versions of Game of Thrones Conquest that have been modded to allow the user to cheat. Cheats have been hardcoded into the game code so that they are either active by default or the hacks can be activated through a mod menu which will allow the player to activate whichever cheats they want to use in Game of Thrones Conquest at any time. – Mod menus and hacked APK / IPA files for Android and iOS are among the most popular ways of gaining an advantage in this game. Using hacks is possible on both Android and iOS device, but it is much easier to find free cheats for download on Android devices. – The nature of mods is such that the mod has to be updated every time the main game GoT Conquest gets an update, making this kind of cheating tool extremely short-lived once it is released.

To find free mods, use our FreeFinder and follow our Download guidelines in order to protect your account and download working and undetected apps. Many mods do not require any root / jailbreak to function at all. 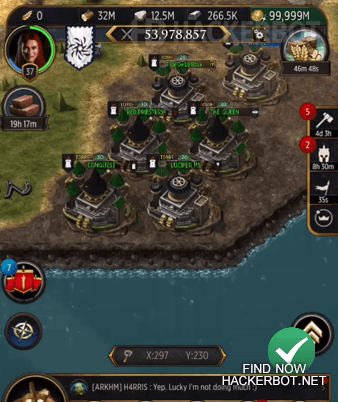 Bots for Game of Thrones: Conquest

As any experienced game hacker knows, there is no wayto mod your gold, resources, prestige, troops, items and building levels directly. There are also no God modes, unlimited money cheats and research hacks. However, there still is a way to gain unlimited gold, resources, troops and building levels over time: Bots. A robot or short ‘bot’ is an app or macro that automatically plays GoT Conquest for you while you are out ding real life things, sleeping or playing other games. A bot has to be set up once and is able to automatically perform automated tasks forever, such as farming monsters, attacking and farming players, upgrading buildings, doing research, collecting daily rewards, building and healing troops, upgrade gear and even saving your troops from incoming raids.

Bots can be set up through emulators using macro recorders and editors. They can also be set up on rooted or jailbroken devices, howbeit, not as well as on emulators. It is always better to set up your own scripts when it comes to using bots in Game of Thrones Conquest, instead of using software or downloads that someone else has made, as they are generally and sadly much more often detected and banned. You can find a tutorial on how to set up your own mobile game bot here.

As in most city builders and mobile online strategy games, it can be a huge advantage to be in control of multiple accounts if you want to be one of the top players of Game of Thrones: Conquest. Having multiple accounts will allow you to attack other players using multiple armies, set up a strong Allegiance, use your alts to feed your main account, save armies, farm more monsters at once, get more free gold, trade powerful gear and armor, take seats of power alone, level your lords more quickly and so on.

However in order to set up and use multiple accounts without getting banned, you will need a VPN that allows you to switch your IP, you will need multiple emulators and a lot of time to set up bots or actually play multiple accounts. The best number of alts to go for is either 4 or 8 or 12 ect, since you can always band 4 players together to rally for one powerful march against players.

Two thing are important when it comes to multiple accounts cheats in GoT Conquest: If you want to be one of the best players, you will have to do it, since all top players do this in this kind of strategy mobile multiplayer game and secondly, you will have to always use one static IP for every single account or you will be banned for cheating using this method. A VPN is obligatory for this way of getting around the rules, but it is arguably the most powerful hack to use in Game of Thrones Conquest.