What is a macro Recorder + Editor: A macro recorder allows you to record your actions on a PC, including mouse and keyboard inputs, the Editor then allows you to edit the recorded actions, add programming to it, such as IF statements using visual recognition ect. Playing back such macros and programming them can allow you to bot games on Windows, Android Emulators and even iOS emulators easily. 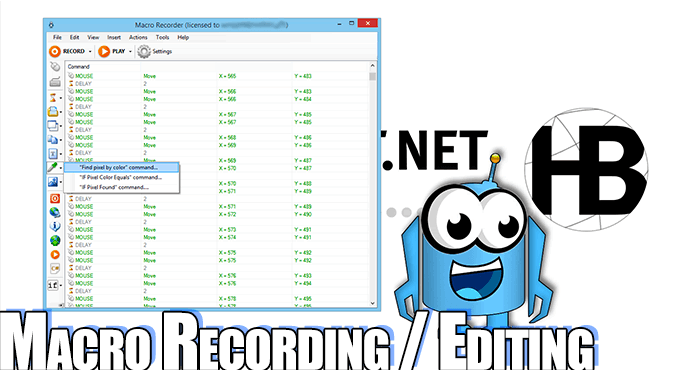 HackerBot Macro Recorder
This the the macro recorder, editor and programming tool we recommend, since it is more than just a recorder and player, it allows you to program IF statements using visual recognition, memory reading, it allows for opening and checking file paths, opening websites, compiling EXE files and even stealth mode operations. It is it’s the perfect tool for bot creation in games on Windows PC, Android Emulators, iOS Emulators and anything you can get to run on a PC. Also works great in browser games.

More advanced programmers would probably call macro recording with if statements “babies first game farming bot”, and they would mostly be right I guess, but not all of us are actually able or have the time to lean coding. And that is where macros are most useful, if you are either new to coding, or you cannot / don’t want to do it, this is the way you get to automate your gaming.

What kinds of Games will this work for?
Obviously what you will want to make bots for is online games that require you to farm a lot in order to save a lot of time, level up and get goodies. This kind of software is best suited for use in games that use static interfaces, such as mobile games, where this kind of script really shines. However, it can also be used in more advanced games to do repetitive actions for you. Lets say you have to spam an AoE heal for 30 minutes for your team to farm, this kind of bot can do that for you. Or you want to make an AFK script so you don’t get disconnected from the server or a bot that sends messages in chat… it works for all of that.

Is this easy to learn?
Back when Flash browser games were a thing, I used this technique a lot to farm certain games, that were basically mobile games on a browser in flash, and while it takes some time to set up your loops and then optimize them after they fail a few times, if you are adept at leaning independently, this should not be a problem for you. However, this capability of thinking creatively and solving problems on your own has to be there, else you will just get frustrated. It is very satisfying to create your own bot and then have it farm a game for months and climbing up the leaderboards. It’s well worth the hassle.