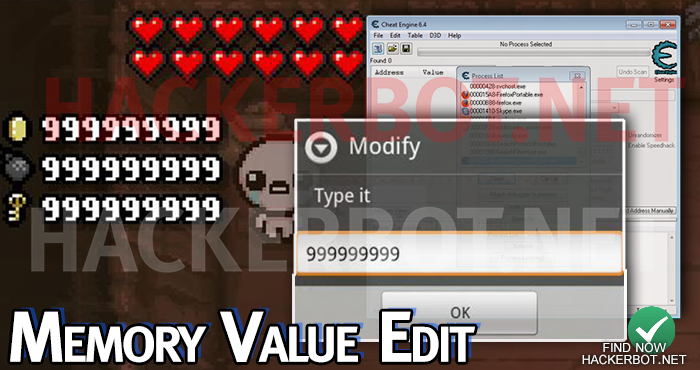 Memory editors are universal tools that allow you to cheat in essentially every game to a certain extent. These tools allow you to scan the game memory for data/values and then change/hack that data. This tutorial will show you the basics of memory editing/game hacking.

Exact Value Search (Normal Scans)
This is the most basic form of memory editing and every single memory editor can do it without exception. Hereby you are searching for an exact number or data string that is known and usually visible within the game, such as money, gems, skill points, health ect.

Speedhacks
While not all memory editors come equipped with this feature and while not every kind of game can be sped up or slowed down using the same techniques, it has become a pretty common feature in memory editing software and game hacking apps lately. Speedhacks, as the name may imply, allow the user to speed up or slow down a game.

Understanding the usual speed hack nomenclature, there is nothing more to it than enabling a speedhack and entering the speed multiplier usually. But keep in mind that speedhacks will not work for every game on every device. There are different methods and no size fits all.

Value / Data Types
If you want to learn game hacking and memory editing in more depth, you have to understand the concept of value types: They are essentially different “packages” that allow for different data and values to be stored. If you do not know the exact limitations of each data type, it is usually best to use the ‘All’ or ‘Auto’ option in memory editing / game hacking.

Unknown Initial Value Search (Fuzzy Scans)
This is the first of the more ‘advanced’ game hacking techniques using memory editors and it allows you to find values / numbers in the game memory if you do not know the exact number. In this case the memory editor will scan for all values in a game, then narrow down the search by ‘increased values’, ‘decreased values’, ‘unchanged values’ and ‘changed values’. Allowing the user to hack aspects of a game, such as health bars, EXP meters and other variables that are not shown directly in any menu.

Encrypted Value Search
Value encryption or ‘stealthying’ of memory data is a technique that is commonly used by game developers to make cheating harder for players. Usually this is done to sell more ‘stuff’ in the game shop, to keep the integrity of scoreboards or just out of spite / hate for game hackers.

Encrypted searches are different in every memory editor and they will generally try to scan for a set of known encryption and stealthing techniques, so it pays to have multiple memory editors at hand in case one does not cover all the decryption that another one would.

What games doe memory editing hacks work for?
Every game. However, not every game will be entirely client-sided. In client-side heavy games, you can expect god modes, money hacks, unlimited items ect. In server-sided games you cannot expect the same level of power when it comes to client-side hacking, which this is. Hacks are still possible in server-sided online games, but they will be nowhere as powerful as in single player games where you can essentially hack all the game data.

Also one should do some serious research before jumping into trying to hack any online game using any memory editing application, since a lot of games will simply ban you if they detect a common game hacking app accessing their game memory.

Admin privileges
In order for a memory editor / game cheating application to be able to access and change the memory of other apps (games), administrator privileges or root privileges are always required. On PC/Mac you have these rights by default, but on Android / iOS / Consoles you will have to get them by installing a hack, root or jailbreak.